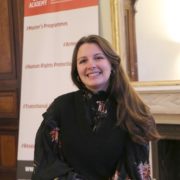 The members of the jury thought that Mrs. Timmermans addressed a question that is both perennial and of particular actual interest.  Perennial because the treatment of the most vulnerable has been a concern in all wars.  Actual because that question is of dramatic pertinence in contemporary conflicts from Ukraine to Afghanistan, Syria, the Democratic Republic of the Congo, the Sahel, etc.

The members of the jury appreciated the originality of the approach. Indeed, the question of the special treatment of defined categories of victims of war in relation to the laws of captivity or occupation has been frequently researched. However, the question of the implementation of a special, enhanced protection status in relation to the laws regulating the conduct of hostilities has not, until now, received the attention it deserves.

Mrs. Timmermans did not limit the analysis of this topic to the protection of women; she highlights as well other forms of vulnerability, such as that of children, persons with a disability, older people, etc.

The members of the jury found that Mrs. Timmermans took care to study this question in relation not only to international humanitarian law, but also to human rights law, and was able to shed light on the interactions between these two branches of law and their complementarity.

Moreover, this paper is well supported by the argument that, in the conduct of hostilities, the belligerents must take into account the fact that the civilian population is not homogeneous, and that different groups must benefit from a special protection status (« enhanced protection ») with regards to their vulnerability.

Finally, it is obvious that this paper corresponds perfectly to the attribution criteria of the Henry Dunant prize, since the fight against discrimination and the protection of the most vulnerable was at the heart of the combats lead by Henry Dunant.  In calling the belligerents to better take into account the enhanced protection status of the civilian population in the conduct of hostilities, Mrs. Timmermans follows in the steps of Henry Dunant.

The Henry Dunant Prize – Research 2022 was awarded on 28 October 2022 at the occasion of the graduation ceremony of the Academy of International Humanitarian Law and Human Rights Law, in Geneva.

Summary of the paper

Contemporary armed conflicts harm civilians in a number of ways. Such harm and suffering must always be assessed from the perspective of vulnerabilities of the person or community affected by it. The principles and rules on the conduct of hostilities nonetheless focus their protection on ‘civilians’ and the ‘civilian population’ as a whole. While the universalist approach in IHL does not recognize the differences within the civilian population,  pre-existing vulnerabilities of civilians and certain groups lead to a varying impact of violence in practice.  It is therefore crucial that the provided protection reflects the specific needs of the individuals involved, requiring consideration of the elements that create singular and interconnected vulnerabilities. This paper seeks to explain to what extent different characteristics of the civilian population can and should be considered in the interpretation and application of the principles on the conduct of hostilities.

The final section of the paper examines how the different characteristics of civilians can be considered and how differentiation in the interpretation and application of the principles of the conduct of hostilities can be used to further protect civilians. First, it sets out the positions on the applicability of prohibition of adverse distinction during the conduct of hostilities. Then, it argues that there are many instances where the characteristics of civilians can play a role in the interpretation and application of the principles of distinction, proportionality, and precautions. The author concludes that an ideology of identity and moral assumptions underpin the notion of ‘civilian’, therefore possibly excluding persons from civilian immunity or the proportionality assessment based on their gender and age. Moreover, it explores the categories of civilians that can face more harm and whose harm is sometimes invisible and how this can be considered in the proportionality assessment. Lastly, it explores how precautions can be more effective when the different characteristics of the civilian population are considered. The section concludes by arguing that there would be a duty to differentiate in certain instances, which must be based on adequate, reliable, and disaggregated data. Finally, it highlights some challenges in treating the civilian population as non-homogenous because of the risk of stereotyping, the difficulties in gathering and using disaggregated data, and the operational challenges in armed conflict.

In its conclusion, the paper argues that addressing the different characteristics of civilians allows to pinpoint the overinfluence of ideologies and moral assumptions as well as identifying those categories of civilians that do face more harm, and those whose harm or risk is sometimes invisible. The author suggests that parties’ increased understanding of these differences, the ways to accommodate them, and their capacity to do so will improve the protection of the civilian population in the conduct of hostilities.

Sophie Timmermans holds an LLB and an LLM from the University of Antwerp. Because of her interest in human rights law and humanitarian law, she decided to pursue the LLM at the Geneva Academy. In the past few years, she has been involved in activities concerning arms control, disarmament, and weapons use. During her time at the Academy, Sophie interned with the Small Arms Survey and the Permanent Representation of Belgium to the United Nations.