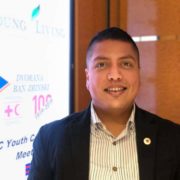 Auner has distinguished himself through his charisma and exceptional leadership at the Nicaragua Red Cross, which he joined as a volunteer at the age of 11. He then begins his ascent as a member of the Red Cross Youth, demonstrating his loyalty, passion and engagement in the education of other young people like him, until his election in 2006 as representative of the Red Cross Youth to the National Council of the Nicaragua Red Cross. He is then 15 years old.

In 2008 Auner is sent to represent his National Society at the great meeting of Ibero-American youth in Valencia, Spain. The following year, he takes part in the 3rd world gathering of the Red Cross Youth « Youth on the Move » and « Journey of an Idea » in Solferino, Italy, two events organized by the International Federation of the Societies of the Red Cross and Red Crescent (IFRC).

In 2010 Auner is elected for two years as coordinator for the regional network of Red Cross Youth for Mexico, Central America and Panama. In addition, he is chosen in 2011 by the Federation (IFRC) as President for the Youth and Volunteers strategic group during the Interamerican Conference in Haïti following the 2010 earthquake.

Auner is named in 2013 Director of the Nicaragua Red Cross Volunteers, and, following an institutional crisis that same year, promoted to interim General Director of the National Society. He is then only 23 years old, which makes him the youngest General Director in the history of the National Society of the Nicaragua Red Cross, and probably the world. In 2014 he receives the « Youth Prize » of his country, awarded by the National Parliament.
In 2015 he is a member of the regional team of intervention in Toluca, Mexico. That same year, the National Society sends his candidature to the Youth Federation Commission (IFRC), to which he is elected in December during the General Assembly.
The National Council of the Nicaragua Red Cross unanimously elects Auner as General Director of the National Society in 2017, a post he still occupies today. In 2018, he is invited by the Spanish Red Cross to follow their delegate education programme, and in 2019 he is this time invited by the ICRC to follow the delegation education programme in Geneva.
For Auner, the legacy that Henry Dunant left behind has become a mandate. Beyond his administration education, he has not stopped during the last ten years being active in the field of this part of Central America. He organizes large humanitarian actions during natural disasters, such as the earthquake of Nagarote in 2014, the 2017 floods and the various national emergency situations due to the socio-political unrest that Nicaragua suffers and which is worsening since 2018. He leads the team that manages the crisis operations at the national level.
The Henry Dunant 2020 Prize for Fieldwork was awarded to Auner Garcia Garcia on 8 March 2020 in San Jose, Costa Rica, by Roger Durand, President, and Cécile Dunant-Martinez, member of the Henry Dunant Prize Foundation board, in the presence of a delegation of the Nicaragua Red Cross and its President, Mr. Oscar Gutierrez Somarriba. Auner shares the 2020 Fieldwork Prize with Mrs. Dyanne Marenco Gonzalèz.