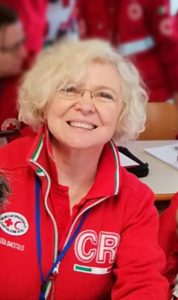 Maria Grazia Baccolo has devoted herself for over 25 years to the development of the historical sites of the Humanitarian Movement, to the teaching of the history of the Red Cross, and to humanitarian action itself.

Maria Grazia Baccolo is from Castiglione delle Stiviere. Very young, she engaged as volunteer in the local section of the Red Cross.  She has constantly trained herself, in the field for first aid, in communication, perfecting her knowledge of the fundamental principles of the Humanitarian Movement and its history.

From 1990 to 2011, she worked first as a volunteer and then as an executive (curator or director) at the Museo internazionale della Croce Rossa in Castiglione.

With some friends she created the famous Fiacolata, a walk with torches from Solferino to Castiglione, the third Saturday of June. In June 2019, at the 25th anniversary of what has become an annual event in Lombardia, she was awarded the medal of the Italian Red Cross.

For the last twenty years, she has organized as a volunteer visits and stays for groups of people interested, among other destinations, by the sites of Castiglione and Solferino.

A force in the team of Professor Paolo Vanni, with whom she shares this Prix Henry Dunant – Field 2019, she took part in the organization of the well-known courses of the Italian Red Cross for over ten years.  Since Prof. Vanni’s death in 2018, she took the responsibility of the pedagogical part of these courses, for example in Pavia in August 2019.

Always as a volunteer, she offers her services as a a translator for French-speaking visitors.  She also translated scientific texts from French to Italian.  Currently, she is working on the publication of the Louis Appia report on the war of Schleswig in 1864, an important text of some 110 pages that she translated into Italian.

Since 2018, she works closely with the Geneva-based Louis Appia Society to help understand the actions of this ci-founder of the CICR, notably in Italy.  Between June and July 2019, she negotiated with the mayors of Solferino, Lonato, Storo and Ledro their agreement to place a commemorative plate dedicated to the first humanitarian globalist.

Tirelessly, discretely and effectively, Maria Grazia Baccolo contributes to the diffusion of the humanitarian ideals of Henry Dunant. Militant in the field of communication, she is by example a model for the young volunteers of the Red Cross, who are many in Italy.

The Henry Dunant Field Prize 2019 was awarded to Mrs. Maria Grazia Baccolo in Florence on October 2nd 2018 at an official ceremony at the headquarters of the Tuscany Red Cross, in presence of Mr. Francesco Rocca, President of the Italian Red Cross and of the International Federation of the Red Cross and Red Crescent Societies. Mrs. Maria Grazia Baccolo shares the 2019 Field Prize with Prof. Paolo Vanni, a colleague and friend.  The diploma and our appreciation for a life devoted to the Red Cross were given to her by Roger Durand and François Bugnion, members of the Foundation board.